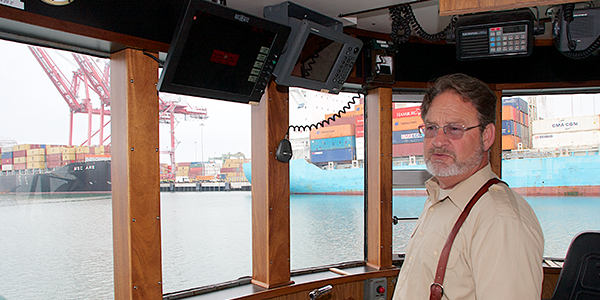 Grosshans has been on the committee for five years and is currently co-chairman of a subcommittee charged with TASK 1306, “Recommendation for the Maintenance, Repair and Utilization of Towing Equipment, Lines and Couplings”.

He says upgrading uniform safety standards for the tug-barge industry – “both “blue water and brown water” – is a challenge, as the TSAC is dominated by small inland operators who are often resistant to change.

“There are about 1,800 costal towing vessels in the United States and almost 5,000 on the rivers,” he said. “The smaller ‘brown water’ operators are very vociferous and resistant to change. Their attitude is about 25 years behind ours when it comes to safety.”

Grosshans added that the large inland towing companies, such as Kirby, Ingram and ACL, have full-blown safety-management systems and other safety programs similar to those of Foss.

At Foss, Grosshans has been active in helping to establish man-overboard procedures.

“Mark brought up his valid concerns on what actions need to be taken in case anyone falls overboard at the Regional Safety Committee meetings,” said Director of Health and Safety Al Rainsberger. “He spent hours researching methods, procedures and rescue equipment available and this has resonated across the board to all of our other regional committees.”

Grosshans has operated ocean and harbor tugs but prefers working on the outside.

“I prefer coastal and ocean towing,” he said. “For me it’s probably one of the last places you can be a true seaman. If you’re on a containership, it’s all about the boxes, and on a tanker it’s all about loading and unloading the cargo. Being on a tug is all about being a mariner first.”

He has towed throughout the Pacific, to Central and South America the Pacific Islands and Alaska. He has logged about a dozen trips through the Panama Canal and towed on the West Coast of Australia. He currently operates the tug Edith Foss on regular supply runs to the military bases on San Nicolas and San Clemente islands.

“It’s something different every day,” he said. “I love my job and I can’t imagine doing anything else.” Mark also has two sons who are both in the industry and are either currently working for FOSS (Erik) or have recently as on the “Constellation” tow (Jason).