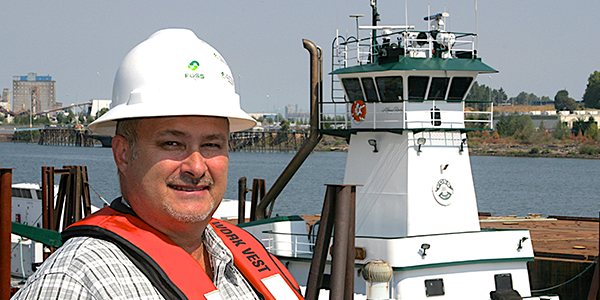 As a teenager growing up in southern California, Paul Hendriks wasn’t much of a surfer, and every time he got on a skateboard, he fell off.

“Commercial fishing was the only thing I could do on the waterfront,” said Hendriks, recently appointed Foss regional operations manager for the Columbia-Snake River Region. And thus began his three-plus decade career in the maritime industry.

Hendriks went on to graduate from the University of California at Irvine in 1987 and took a job operating boats for Jacobsen Pilot Service in Long Beach.  Working around tugs, he decided to aim for a captain’s license and worked as a deckhand and mate for a number of companies in the process.

“When Foss bought Wilmington Transportation in 1998, I was hired as a management captain,” Hendriks said.

He was a boat operator for seven years before becoming superintendent of Foss operations for Chevron in the Pacific Area Lightering Zone, and in 2008 assumed the added responsibility of being port captain for Foss in El Segundo. In 2013 he became port captain for southern California.

As the top man in Portland, he replaced Dustin Johnson, who left Foss to begin training as a Columbia River pilot.

“It’s always a challenge being the new guy, but the best way to approach that is head-on,” he said. “You learn names, learn as much about the people and the operation as possible, and you keep an open door.”

As for his career so far, Hendriks, 50, says he wouldn’t change a thing.

“I’ve had the privilege of working for two very good companies, Jacobsen and Foss,” he said.